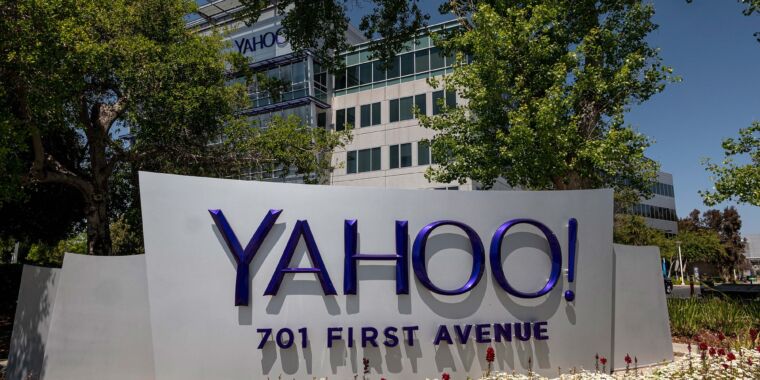 Verizon announced on Monday that it is selling Yahoo and AOL for $5 billion to private-equity firm Apollo Global Management. Verizon made the deal official just a few days after news reports said that Verizon had put Yahoo and AOL up for sale. The media division will be known just as “Yahoo” after the sale is completed later this year.

Verizon purchased AOL in 2015 for $4.4 billion and Yahoo in 2017 for $4.5 billion, even though the once-dominant Internet brands had fallen from prominence years before. Verizon’s attempt to compete against Google and Facebook in the online advertising market didn’t work out, leading to a series of layoffs and a goodwill impairment charge of about $4.6 billion.

Verizon tried to put a positive spin on the sale in today’s press release, saying that the Yahoo/AOL division known as Verizon Media is “one of the world’s premier global technology and media companies.” Besides Yahoo and AOL, Verizon Media includes “leading ad tech and media platform businesses,” Verizon said.

“Verizon Media has done an incredible job turning the business around over the past two and a half years and the growth potential is enormous,” Verizon CEO Hans Vestberg said. “The next iteration requires full investment and the right resources. During the strategic review process, Apollo delivered the strongest vision and strategy for the next phase of Verizon Media. I have full confidence that Yahoo will take off in its new home.”

Verizon didn’t get much interest from buyers

Apollo reportedly didn’t have much competition from other potential buyers. “Other suitors previously showed interest in buying off certain pieces of the media unit, which includes websites such as TechCrunch and Yahoo Finance, but weren’t willing to make an offer for the whole portfolio, according to a person familiar with the matter,” The Wall Street Journal reported today.

Verizon said it “will retain a 10 percent stake in the company, which will be known as Yahoo at close of the transaction” and that the sale “is subject to satisfaction of certain closing conditions and expected to close in the second half of 2021.” Verizon is slated to get its $5 billion from Apollo in the form of $4.25 billion in cash and preferred interests of $750 million.

Verizon’s total operating revenue in Q1 2021 was $32.9 billion, with about $23.7 billion of that coming from its wireless telecom division. Verizon reported $3.1 billion in Q1 revenue from its FiOS wireline services.

The Verizon Media division’s $7 billion in full-year 2020 revenue was short of the company’s goal of $10 billion annual revenue by 2020, The Wall Street Journal wrote last week. However, Verizon Media’s $2.3 billion in revenue in Q4 2020 was up 11.4 percent year over year, the first time it achieved year-over-year growth since Verizon bought Yahoo in 2017. Q1 2021 revenue was $1.9 billion, up 10.4 percent year over year.

Verizon is selling the media division while revenue is on the upswing, saying that the past two quarters of financial results were “driven by innovative ad offerings, consumer e-commerce, subscriptions, betting, and strategic partnerships.” Despite Yahoo’s long decline from its early history as a dominant Internet brand, Verizon said that Yahoo is still “the fourth most visited Internet property globally.”

“We are big believers in the growth prospects of Yahoo and the macro tailwinds driving growth in digital media, advertising technology and consumer Internet platforms,” said David Sambur, senior partner and co-head of private equity at Apollo. Verizon Media CEO Guru Gowrappan will continue to lead the company after the sale is complete, the announcement said.

Why Ought to You Begin Your Multinational Enterprise on 500pips

Entrepreneur admin - May 15, 2021 0
500pips was created back in 2018 to offer brokerage for CFDs, Forex and Crypto trading industry. They offer ultimate seamless experience for trading and...

The St Louis Cardinals have skyrocketed up MLB’s energy rankings

An Indonesian Submarine Carrying 58 Folks Has Gone Lacking, and the Navy Is Racing...

Entrepreneur admin - April 22, 2021 0
Local officials said the submarine's crew members only have enough oxygen to last until Saturday. Grow Your Business, Not Your Inbox Stay informed and join our...