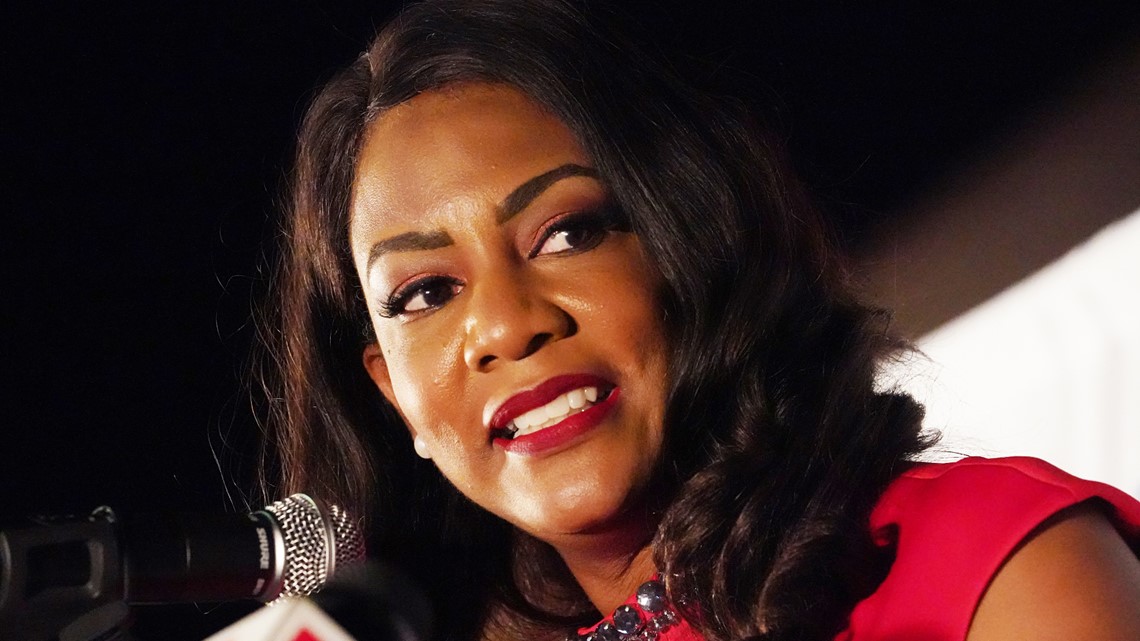 Jones will be the third Black mayor in the history of the city, and the first since Clarence Harmon, who served from 1997 to 2001

Jones defeated Spencer with 51.68% of the vote. Jones and Spencer, both Democrats, advanced to the general election after St. Louis’ first nonpartisan primary election.

Jones, the city’s treasurer since 2013, was successful in her second mayoral campaign. Jones will succeed the woman who defeated her in the 2017 primary election, Lyda Krewson. Krewson became the city’s first woman mayor after winning the general election in 2017.

Jones will be the third Black mayor in the history of the city, and the first since Clarence Harmon, who served from 1997 to 2001.

When she takes office, Jones will take the lead on what to do with American Rescue Plan funds, issues surrounding the St. Louis City Justice Center and increasing violent crime in the city.

Want more political news delivered straight to your inbox? Sign up for our 5 On Your Side Politics newsletter.

Jones said the Treasurer’s office has been working to develop a plan for the funds. Last month, she released the following statement regarding the estimated $450 million.

“The Mayor’s Office and the Treasurer’s team have been in close communication regarding the American Rescue Plan. Programs and disbursements like renter and mortgage assistance, small business assistance, and money for homeless services should be moved on quickly. We need to also make sure that we allocate a small portion of the funds for proper oversight to ensure equitable allocation of these funds. As Mayor, I will work quickly, and in partnership with regional and city leaders, to identify areas where we can lift up those who have been hit hardest by this public health crisis. As a candidate for Mayor, I am taking an active role in making sure that no one is left behind in our recovery from COVID-19.”

Jones said she cleaned up the treasurer’s office when she took over in 2013 and said she has the experience needed to fix issues plaguing the jail.

“Coming into somewhere where there are existing problems is not new to me,” Jones said. “I have experience coming in and taking over and fixing things, this will be no different, just on a larger scale.”

She said a solution must come from cooperation amongst city leaders and the courts to get the wheels of justice moving faster for inmates. She also wants to fix infrastructure issues at the jail. She said hiring more guards is a must.

“We need to get applicants ready to hire and move them through the process,” Jones said.

Jones addressed her plan for crime in St. Louis in an interview with 5 On Your Side Political Editor Casey Nolen:

We have to approach it as a region, and that means using my existing relationships with County Executive Sam Page and St Louis County Prosecuting Attorney Wesley Bell and our current Circuit Attorney Kim Gardner to bring all of the necessary players to the table that’s faith-based, that’s civic, that’s corporate, that’s philanthropic and making sure that we adopt the mantra that we are our brother’s keeper. Our problems and our destinies are linked, and we have to approach them as such because we didn’t get into this overnight, or by ourselves, we won’t get out of this overnight or by ourselves.

We need to declare gun violence as a public health crisis and address it as such, just as how we’ve addressed this current pandemic. We need to have that same laser-focused attitude of looking at the root causes like we did with the pandemic, we need to address that same sort of root cause, focus on gun violence and public safety.

Casey Nolen: There might be some people who live in more high crime areas of the city who would agree with that, in the broader picture, but might want something more immediate. Right now, they might want more police officers on their block. Is there anything in the nearer term, or is that more near term that I’m understanding it.

Tishaura Jones: I think, is more near term than people think. They say that, ‘Oh well, yeah that’s good and, yes, we agree with that,’ but once we adapt the focus of looking at the root causes, then that is looking at the 20% of the people who caused 80% of the problems.

When Chief Hayden had a rectangle or a sort of polygon that talked about where crime was located, he was right, the crime was located in those areas, but our approach didn’t have to be that same old arrest and incarcerate model. It’s also bringing other tools and resources to the table.

What are the issues affecting that community? And how do we bring those resources to the table? Is it mental health resources? Is it childcare? Is it homelessness? Is it substance abuse and making sure that we are deploying the right professionals to the right call when we get calls in those neighborhoods? So it’s not about just arresting and incarcerating, it is it’s about providing the resources that our communities need in order to not just survive, but to thrive.

Tishaura Jones: I think we have enough. Honestly, I feel like we have enough and I think that we need to look at how our resources are deployed. The recent Teneo report talked about how there are certain jobs within our current police department that don’t have to be done by licensed officers and could be done by civilians.

We’ve seen in other cities like Berkeley, California, where they have deployed regular citizens to do traffic stops instead of licensed officers, so again, you know, how are we deploying our current resources? And we need to take a look at that from top to bottom.

Casey Nolen: Just for those who might not know, the report you’re talking about was commissioned and paid for by private dollars and it looked at both the city and the county.

Casey Nolen: That’s interesting that you bring up the way they’re doing things in other cities. Are there things other cities are doing better than St. Louis that you think we should be looking at and possibly adopting, and, if so, what?

Tishaura Jones: Like I said, the deploying civilian resources to different calls is definitely something we should be looking at. Focused deterrence was one program in Oakland, California where they saw a marked decrease in crime. So we should be looking at that, but I don’t think that we should be having a discussion about just one solution. It’s not just one solution. It’s not just Cure Violence, it’s not just focused deterrence, is not just body cameras, it’s how are we combining all of those in addition to making sure that we provide an environment where people can thrive, not just survive.

So how are we connecting people to jobs, good-paying jobs where they can provide for their families? How are we also investing in neighborhood development where people leave their homes in the morning, and the first thing that they see isn’t a dilapidated building or buildings that are falling down around them? Or vacant lots that aren’t being built up?

Just like investment in the central corridor and downtown was deliberate and intentional, disinvestment in parts of north St. Louis and south St. Louis was deliberate and intentional, so we should not be surprised that the population is leaving these areas. That our schools are closing because we don’t have as many people living in St. Louis city proper as we’ve had in recent years. We have been on a consistent population loss since the turn of the century.

Digital Marketing admin - May 17, 2021 0
Guys, we spend eight hours a day doing digital activities. That’s more than half the day. More than most of us sleep. And we...

Entrepreneur admin - May 18, 2021 0
May 17, 2021 6 min read This story originally appeared on StockMarket Top Consumer Stocks To Consider Buying Right Now In an increasingly consumer-focused world, it would make sense...